When electromagnetic waves, such as those radiated from a radio antenna, strike an electrical conductor, they are absorbed and an electric current is generated. The electrical resistance of the conductor generates heat. Since biological tissue is also a conductor for the electric current, it can be heated in this way (example: microwave device). There are different systems with different
frequencies. We choose to use a system with 13.56 MHz and low-frequency modulation. Durch eine spezielle Antennenanordnung und den Einsatz einer Trägerfrequenz von 13,56 MHz mit niederfrequenter Modulation kann so eine begrenzte Körperregion erwärmt werden, wobei durch physikalische und biologische Unterschiede die Erwärmung von tumorösem Gewebe wesentlich stärker ist. 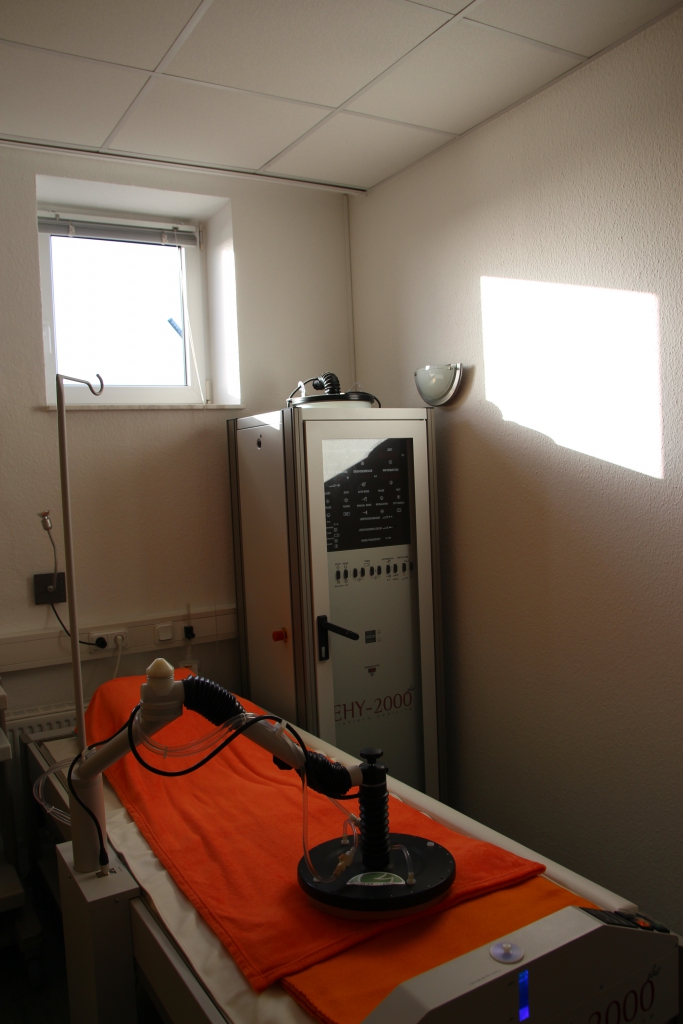 The EHY 2000 device used in gisunt® hospital is equipped with a pair of electrodes (an applicator that can be directed towards the tumor region and a counter-electrode integrated in the waterbed surface) and modulated shortwaves (13.56 MHz) that flow through the body tissue. Optimal heating of the tumor tissue is ensured up to a depth of 10 to 14 cm with narrow and loss-free energy excitation. A computer-controlled monitoring system prevents surges on the electrodes as a protection against redness and burns on the skin surface. The heat supply is based on the principle of capacitive coupling. An autofocus effect which has been described is due to the increased energy absorption capacity of cancer tissue compared to the healthy tissue. This is mainly due to a higher ion mobility and a greater dielectric constant in the disordered, polarized aqueous tumor cell environment. In addition, the tumor hardly achieves any regulation in contrast to healthy tissue due to its rapidly grown, immature vascular supply pattern. This results in selective thermal damage to the cancer tissue rather than to the healthy tissue.

Temperature in the tumor is controlled in a non-invasive manner via a specially developed measuring system integrated in the system which, in contrast to the invasive temperature monitoring, does not entail the risk of infection and distant tumor cell seeding. We use a thermometric method. In studies, the invasive measurement is performed by means of glass fiber optics. In order to prevent the patient from cooling down during the therapy session (60 to 120 minutes), the temperature of the waterbed is maintained at a constant 30 °C.

In modern-day oncology, the science of cancer, people have been increasingly interested in the use of heat to combat cancer. It was recognized a long time ago that tumors tend to shrink after a prolonged period of high fever. However, it was only in the last two decades with the advent of devices for targeted overheating (hyperthermia) that the theoretical findings were finally converted into practical therapies.

In addition to whole-body hyperthermia, regional hyperthermia has recently become more important because it is a non-invasive, very gentle, well-tolerated and effective therapy. Only selected areas of the body are overheated, which has a greater effect on the tumor due to its poorer vascular supply pattern and other physiological features (dielectric constant).

The effects of regional deep hyperthermia

The heating of tumor tissue to 42 °C warms up the adjacent healthy tissue as well. Healthy tissue can easily dissipate warmth by increasing its blood circulation, which the tumor tissue cannot do because of its more primitive blood supply. This leads to heat build-up in the tumor tissue, which, in turn, leads to disturbances in important metabolic processes during cell division and maintenance and promotes a lowering of the pH value (increased temperature sensitivity). In addition, vital cellular repair systems are deactivated by thermal damage; hence, damaged cell components (membranes, proteins) cannot be replaced, ultimately facilitating apoptosis (the death of tumor cells).

According to recent investigations, when heated to about 42 °C, cancer cells – in contrast to healthy tissue – form particularly characteristic protein structures on their surface called heat shock proteins. Some of these proteins stimulate the immune system by activating its natural killer cells to attack the tumor cells.

The electromagnetic radiation emitted from the applicator intervenes primarily in the communication process among malignant cells. Chemical and physical processes in the cell membranes are affected so that signals responsible for cell division are no longer transmitted optimally, thus inhibiting the growth of cancer tissue.

The optimal therapeutic modalities will be determined for your disease during the initial examination. During the treatment session, you will lie comfortably on a pleasantly heated waterbed. A swivel-mounted applicator is positioned over the affected tumor region. From this transmitting electrode, the computer-controlled shortwaves (13.56 MHz) flow through the healthy tissue towards the external electrode which is integrated in the waterbed. When the shortwaves hit cancer tissue, they are converted to warmth more potently than in the healthy areas due to cancer tissue‘s increased energy absorption capacity. Because hyperthermia is applied to a narrowly limited area, the treatment’s toll on the patient is only slight. High therapeutic tolerance is therefore guaranteed.

In most cases, regional deep hyperthermia is administered in the form of therapy sessions (up to 8 individual sessions). In order to achieve the greatest possible damage to the tumor, it is often used in combination with other anti-cancer measures such as cytostatic chemotherapy, radiotherapy or whole-body hyperthermia.